Combining two classics games into a new frantic and chaotic nail-biter of a game. How long can you survive not biting your own tail while having to break all the bricks?

Game was made to test out a concept.

ok. the snake is the paddle. That's it. I'll leave the other posts just for science. The creator can see what an initial playthrough might be like. Most people will probably get this right off the bat. For whatever reason I didn't. Even though I've played snake and brick breaker plenty, and read the instructions here, I still didn't get that the snake was the paddle.  I think it was the first thing I tried but when I still died half a second later I assumed that meant it wasn't the goal. Didn't realize the bottom line was a "hole". Thought it looked like another wall so didn't make the connection. In fullscreen it shows a line on the bottom anyways.  So, cool game, hope my feedback helps or entertains at least.  Still way too fast paced for me but I still like the concept now that I get what's happening.

Hey Scisnien, thanks for the feedback. I made this game quickly in my spare time so I didn't think every aspect through completely but your comments were not only entertaining but valuable. I'll add some more details to the instruction write-up so that this hopefully doesn't happen again for others. Thanks for playing my game :)

Thanks for making it and thanks for taking my bewilderment in good humor.

This whole game is a troll isn't it? You just programmed the game to be over in exactly 1.5 seconds every time no matter what.

Oh I touched the green circle this time and a new one appeared somewhere else so I had 0.10 seconds to think I had done something right before the snakes life was inexplicably over again. Neat. 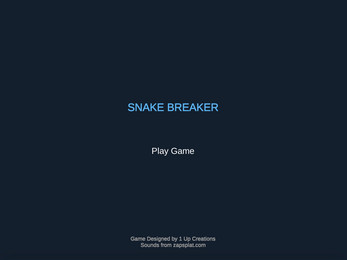 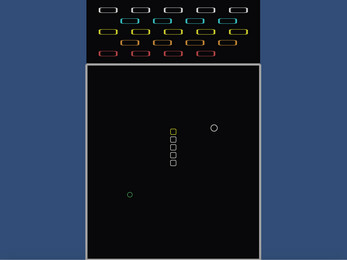